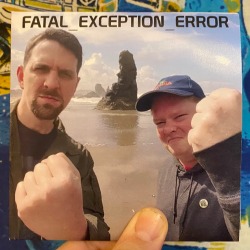 Sort of a new coat that the members of /root_DIR wear when they need to shake things up in the studio, FATAL_EXCEPTION_ERROR is the perfect intersection between hardcore / grind and comedy, and you soon discover that there is absolutely a place in the world for both. Six songs in Seven minutes, there’s not one but TWO songs set in outer space in some capacity. Porkins will get his final respects. Comes with a lyrics / photo book. 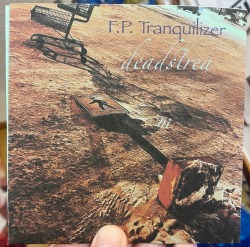 In seven and a half minutes you can enjoy all of F.P. Tranquilizer’s “deadstream,” a delightful collection of low-fi songs – one with full band instrumentation that absolutely rules – that is the best DIY release of the Winter 2022 so far. Short, sweet, passionate songs that show themselves out before they have a chance to overstay their welcome, and as a result, are catchy as hell, and you want more! Keep up the good work, F.P., and let’s hear more from this excellent project! 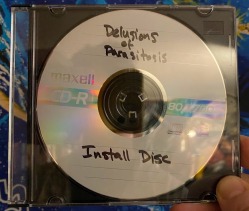 This EP of lo-fi, “industrial” tunes from Delusions of Parasitosis includes some late ’90’s / early ’00’s music arranged and sequenced using Impulse Tracker (itself the heir to Scream Tracker), some of the earliest audio sequencing software that was freely available via the Sneakernet. (Or, if you were lucky enough to have good bandwidth in the late 90’s, maybe you could download the software, too.) Anyway, buried in a folder called “Mixes” lie three (and a half?) tunes that are full of vague spoken samples, heavy guitar, a country / shotgun hoedown, and some killer industrial jams that would feel right at home 20 years ago. Wow. I hadn’t reached a number that was disconnected (or no longer in service) in ages. That was fun… 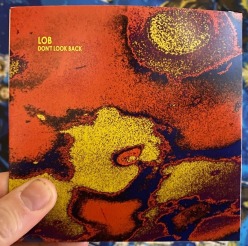 Lob is no stranger to our group, and while I know him mostly as an experimental music artist, he’s actually been working in poetry and spoken word for almost longer, blending music, audio soundscapes, and his poetic sense of how to view the world, and delivers to us an exploration of a world that can only be painted via the sounds that he concocts with his backing band and his own voice. It’s a beautiful, funny, and thoughtful release, and part of me wants a mix of just the backing music, which is as compelling and fun as the poetry and spoken word. A lot of fun, especially after a long day at work, when you put it on, and just let it wash over you as you decompress. 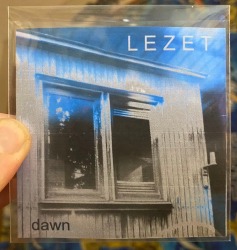 This 3″ cdr of improvised music comes to you by way of Serbia, and the performer Igor Jovanovic. This EP includes xylophone, piano and “objects” performed in a way to create three pieces, and evolve and develop beautifully over the 20 minutes that is captured here. We had a number of problems getting this out out to you, and the Serbian Postal System would not let Igor mail out any music of any kind, and after two different attempts, I worked with Igor to mail out this from the US. Though it is not precisely a collaboration, because Igor did all the work, and I merely assembled it and dropped it in the mail. Here’s a taste of the music scene in Serbia. Enjoy!

05: May: The Sound of Tomorrow – The Council of Holiday Figureheads.

Our entry for May is a super-sized dose of comedy, delivered by group member Heather Zajkowski (Wendella Marmelstein). Almost two hours of scripted comedy and stories, originally broadcast on 23 December 2013. Since 2007, The Sound of Tomorrow has been presenting music, comedy and conversation on a variety of topics. When Episode 109 was written / aired, their show had been on for six years, and so the premise of this particular show is a standard “clip-show” set-up, where the hosts of the SOT are being judged by the Council of Holiday Figureheads, where they are reviewing old “skits and scripted comedy bits” from the history of the show, so they can properly judge Ross & Heather for the holidays. The “Best of” clips are connected with new material written specifically for this show, creating a nearly two-hour story that is perfect for Christmas in May. If you dig this, The Sound of Tomorrow puts out new weekly shows, with a bit of scripted comedy in every episode. (Or, during some weeks, DJ sets.) It’s nice to finally get some comedy in the group. Hopefully, you dig it, too. 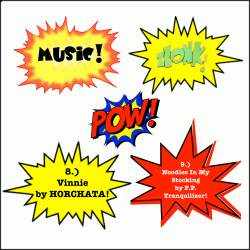 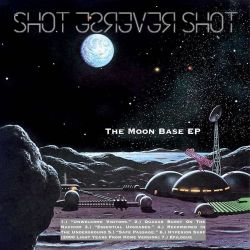 The new EP by space grunge combo, Shot Reverse Shot, is finally here! The crew of the Hyperion are still stranded in deep space, attempting to survive one day at a time, as best they can. On their way to a nearby moon base for much needed repairs, the crew engage in more adventures that are just another day for the robots, crew, and the captain of the starship Hyperion. This release also contains two bonus tracks, by other group members, included a demo track by HORCHATA! (Alex from Kalaloch’s solo project), and a bonus track by F.P. Tranquilizer, about something that we all secretly dream of. 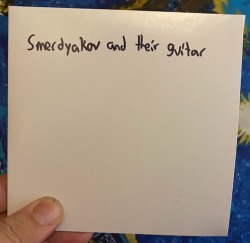 08: August: Smerdyakov and Their Guitar

This disc contains a cross-section of the work that Brandon Zochowicz has played on, some dating back as far as 20 years! There’s some mellow guitar and piano, and some punk and rock music, too. A delightful collection of tunes that is bound to catch your attention, as they span genre as well as era. Brandon is a versatile performer, and the proof is in this disc! 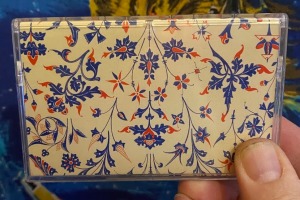 Those who have been in the group since the beginning are familiar with the annual tape release we get from cyveiliog, the mysterious artist amongst us. The tapes are often a little mysterious, and a bit of a challenge for our less weird group, but there are often rewards for those who give these tapes a chance. A wonderful addition to our group, and well worth your time. 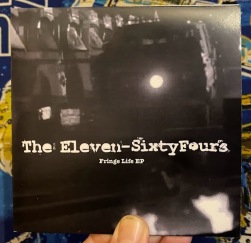 Never Mind Mini-Mutations! It’s The Eleven-SixtyFours, with six new songs about what it’s like to try and scratch out a meager existence after you’ve been stranded in time, and have been forced to live in the Fringes. (Its “Terminator” meets “Max Headroom” in a DIY context.) It’s loud. It was quickly recorded. And now we hate the Metrocops, so some things never change. Enjoy.