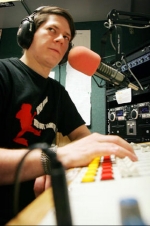 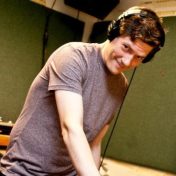 Beginning in 1998, I wandered into the local radio station in Eugene and asked for an on-air position, as my friend Shane had done the same. In a month, I was covering the 4 AM – 6 AM slot on KWVA, which began my radio career. Since then, I’ve held a number of volunteer, staff and on-air positions at a variety of radio stations in Oregon, including, KPSU, OPB, KXRY, KBOO, and KMUZ, and have relationships with a variety of stations elsewhere, included KOWS, KLFM.org, DFM.nu and RadioNope.com)

Here are some of the current programs I’m involved with:

(1998 – current): An experimental / post-punk / radio collage program on KLFM.org, and also available as a podcast at the same time. This is the most recent iteration of a program I’ve hosted at a number of stations, in a few different cities, all in Oregon. (Originally airing in 1998 KWVA, moving to KPSU in 2004, to anywhereanywhen.com in 2015, to at KMUZ in 2016, and to KLFM.org in 2019.) It has gone under the names The Church of Blasphuphmus (Not Jesus) Hour,  Blasphuphmus Radio & (briefly) WTBC Radio in Beautiful Anywhere, Anywhen.) This program now airs live at 3 PM PST Wednesdays (12 Midnight CET). The podcast posts roughly at the same time, and can be subscribed to either here for iTunes, or here or an agnostic feed. 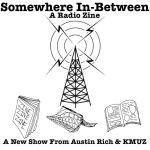 (2020 – current): This half-hour program features news, culture, music, stories and more, all hosted by Austin Rich. You can currently catch is live on KMUZ at 9 AM, Monday mornings (PST), and is available as a podcast both in iTunes and in the aggregator of your choice, too. 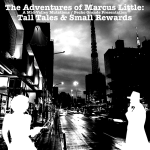 The Adventures of Marcus Little

(2020): This Supernatural Radio Noir from Mid-Valley Mutations & Pecho Grande Films is a fully scripted audio drama, with a cast of characters that includes musicians, voice actors & comedians, all offering their take on the kinds of stories that you would hear on Old Time Radio. This program was featured on KOWS, KWVA, RadioNope.com, and on KLFM.org. (And is still available, if you are interested in airing it, too.) This experimental audio drama ties into the feature film Phylum Sipuncula, and features Negativland’s The Weatherman and Little Fyodor himself providing voices, along with original music by Brendan Murray, Emma Pace Jonas & Matt Orefice. This program was produced by Matt Orefice & Austin Rich, and is available as a limited run series, which you an hear in iTunes or in the aggregator of your choice. 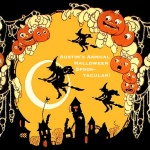 (2003 – current): In 2003 I began collecting “Halloween Music,” and DJed an event that year for some friends to celebrate the season. In 2004, I brought this show to the radio for the first time. Since then, Halloween Programming has been an annual tradition on all of my shows, in some form or another, no matter where I’m broadcasting. This feed includes the Halloween Programs hosted by Miss Rikki of Closet Radio, too. You can certainly subscribe on iTunes, but there’s a podcast-agnostic feed available, too. 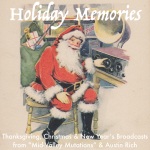 (1998 – current): Even when I try to avoid it, I usually end up making some sort of Holiday Program, when that time of year rolls around. Beginning around Thanksgiving, through until after New Years, this feed will contain all of my Holiday related programming (from that entire span of time), going back to 1998. These show’s cover a wide range of original broadcast stations & podcasts, but they’re all collected here. You can certainly subscribe in iTunes, but there’s a podcast-agnostic feed available, too.

I’ve also been involved in A Number of Other Programs, over the years.