T-Shirts Are Now Available For A Limited Time Only!

In the 27 Years that I’ve been making ’zines and playing in bands, there have been painfully few t-shirts that were ever available to the public. So, it is with no small amount of fanfare that we are offering, for a limited time, a selection of copy- and trademark infringing shirts by Mini-Mutations and The Olsen Twins Ghostlight Ensemble, for the low-low price of $20 apiece. ($25 shipped.)

When these are sold out, there won’t be anymore. If we make more shirts in the future, they will not look like this. And who knows if that will happen again, to be honest? I’ve never sold shirts, so this is a bit of a gamble. And, there’s a limited quantity, too, to add another wrinkle to this puzzle.

These shirts are screen printed by hand, by our lovely friend Sarah Kindl, on 100% Cotton black shirts, in a fetching monochromatic arrangement that looks good on anyone, and shows your support for the kind of music you would like to discuss at parties. (And, in the case of the Twins shirts, will ensure a long conversation about the reference that will be lost on many in this day and age; the perfect gift for the aging hipster with a strange sense of humor!) 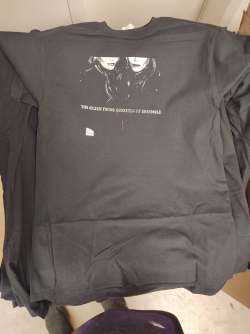 These will be available to buy at the end of February / Beginning of March. HOWEVER, for fans who cannot live without, you can pre-order these NOW, to ensure that you will have the shirt you want.

I’ll be straight up: these shirts look great, I think you are gonna like them too, but there aren’t that many. If this is a success, then there might be more in the future… but not like these. Right now, this is a test. I believe in these. I think they are in the spirit of both projects, and I want these to get into the hands of people who like that stuff I do, like these designs, and: like t-shirts.

Considering all of those factors, I am recommending you should reserve your shirt today. It’ll secure your shirt when they arrive, and it’ll help me weigh the possibilities of doing this again at some point in the future.

To make a reservation: e-mail austinrich@gmail.com with the subject line, “RESERVE MY T-SHIRT.” In the body of your e-mail, please specify the shirt you want; which project, and which size.

Until They Are Gone.

(You can always get the current listening information for our programs on their respective websites: Mid-Valley Mutations and WTBC Radio In Beautiful Anywhere, Anywhen!) 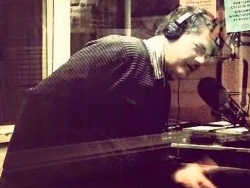 When I first started in radio in 1998, there were often scheduling changes that you just couldn’t announce to anyone short of calling them directly, or through putting up a flier. I used to advertise scheduling changes in my zine back then, and often, listeners didn’t really notice the change. The way radio works — both then and now — is that the LISTENER is choosing to turn on the radio when THEY want to listen. If I happen to be on the air, then that’s a lucky break for me. I’ll have to let the listener decide how they feel about the matter on their own.

I relentlessly taped my show, on cassettes, and I offered edited copies of the show in my zine. I never sold one. When I got the technology to transfer tapes to CD, I digitized my shows, and offered them on CD. Again, never sold one. It wasn’t until the technology existed to post full radio recordings online — certainly a 2004 and later innovation for me — that there was any demand for my show in a form other than the original broadcast, and while I’m glad I recorded my shows for the sake of keeping an archive, in a lot of ways, those recordings are for me alone.

Anymore, what people seem to want from my show are two separate and different things by two different groups of people:

The first group, they want a live, real-time radio-listening experience, that they can either tune in for or stream as it is happening. And this group of people is usually different than the group that wants a timely podcast episode to appear in a dependable (and regular) podcast feed. This change was almost immediate; I began to hear from two different kinds of listeners after I launched the podcast feed for my show in 2004, thanks to KPSU having adopted the technology for all their programs back then. And, for the most part, the live show and the podcast are the same; the latter is a recording of the former. I’m really just producing one show, and it’s being distributed in two different ways. It’s sort of like old school syndication, but I don’t have to deal with mailing CDs out to anyone. They can just subscribe digitally and enjoy.

All of that is a long way of saying that, since 1998, the distribution model for my radio show has changed so many times that I can’t even keep track of everything, save for the spare announcements I make about it on old episodes of my program. So announcing changes are nothing new, and, in fact, can help bring the show to new people at a time new listeners would appreciate jumping on.

With all of that in mind, let me introduce you to the NEW broadcasting schedule that we will be working with, for the foreseeable future, and give you a small glimpse into what the next for radio broadcasts will contain.

Here’s when you can hear the show, now, primarily:

We are happy to return to the airwaves of KLFM.org in beautiful Split, Croatia! We have been syndicated on KLFM before, and we love working with them. So, beginning TOMORROW, you can hear our show on their station again.

This is an interesting time of day, as it is the end of the work day for people who work in offices on the West Coast, it is an early evening listen on the US East Coast, and is late night fare in Europe. (It’s EARLY morning fair for half of Asia, and wake-up / breakfast listening for the rest.) So, hopefully, people who enjoy experimental radio in those parts of the world will enjoy this program, humbly coming to you from Salem Oregon, by way of Croatia.

As to not spoil those who want to tune in live and hear something new, the podcast will not drop until 3 PM PST. So, if you are the kind of person who listens to podcasts as they are released, you’ll hear it in tandem with the Live Listeners on KLFM. Or, you can enjoy it at your leisure, whenever.

There is, however, a need for me to set aside a time to produce the show. And, as some people have become interested in this element of the show, there will be a special time, set aside, for true believers to enjoy the program before anyone else does, via a live streams on social media. We’re still in the beginning phases of testing this, and making sure that we can do this in a sustainable and manageable way. But I will be recording the shows at a scheduled time anyway, so I might as well right? Join me at:

SUNDAY MORNING, 8 AM to 10 AM PST on Social Media for a live streaming version of the show.

Since these streams are not for everyone, and require a certain amount of dedication to enjoy, they will be for those who want to really be a part of the show. I’m hoping to get interactive phone and Skype boxes added to the studio, so that people can get in on the old “Audience Participation” element of how I used to do radio. (Seldom used, but often mentioned when I was live.) However, that will require getting some new gear, which may take a while, so don’t be surprised if the show sounds a little “canned” for a while. Until we can get the new gear, we’ll do our best to deliver a low-tech version of the show that you can interact with in real-time, and someday, we’ll try to deliver a higher quality version.

Another point of order on scheduling: We will be producing a radio show every week, but if you tune in every week, you will hear two different programs: “Mid-Valley Mutations” on one week, and “WTBC Radio” on the other week. Both shows will be heard on KLFM.org during the aforementioned time-slot, but will be available in their own podcast feeds.

This gets at a problem that I’ve mentioned before: I love doing more than one radio show, and I have many ideas for many kinds of radio shows I want to do. But doing two weekly shows is a bit much for one person to handle, especially for someone who doesn’t get paid to do any of this. So, by changing the release schedule, and doing the “every other week” dance like this, I’m able to produce both shows, at a rate I can manage, and keep the quality at the same level it’s been at previously, which is important to me. So hopefully you don’t notice the shows dropping in quality, only in how often they come out.

One final concern: KMUZ. I started “Mid-Valley Mutations” on KMUZ, in spite of the program having roots that go back to 1998. The new direction and name for my 20 year old show was a sort of a re-christening, as I attempted to pursue a vision that felt important to me. Out of the show that I grew at KMUZ, I developed Mini-Mutations, my musical act that has become another creative outlet that I value, and KMZU became a place where I could try and find my voice in a radio world that has many who say very little. KMUZ never censored the program, and never told me to change anything. They encouraged me to make the show I wanted. KMUZ made “Mid-Valley Mutations” possible, and as “Mid-Valley Mutations” moves on to continue finding itself, this is not because of any problem or issue with the place that helped grow us. In fact, I am developing a new program with them right now, which should be announced very soon. But recently I realized that “Mid-Valley Mutations” needed to grow a little more in order to become what it has always wanted to be, and that might need a place where I can go long or short if I need to , a place where the language restrictions might not be as tight, and a place where I can REALLY get experimental without fear of alienating the listener base that KMUZ has so carefully grown. So, this isn’t a parting of ways with animosity, or any negativity at all. I’m excited to find out how my new KMUZ show goes over. But “Mid-Valley Mutations” has gotten some wanderlust, and it needs to roam free in a way that KLFM is only happy to allow. I think, if I was to try and pursue these changes at KMUZ, it would really ruin the mood for everyone.

With all of that said, here’s a tentative calendar of upcoming shows, for the listener who might want to get the feel for the every-other-week low-down, and who might be curious about the next couple of guests on WTBC. It’s exciting to not only have a schedule, but to have carved out blocks of time where I can get my radio done, and not feel like it’s always a rush.

Questions? Suggestions? You know who to call…