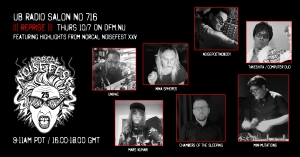 If you follow the podcast version of UB Radio Salon (which usually is available at some point after the live broadcast on Sunday), then you may have noticed that there was a Mini-Mutations appearance… yet again!

DFM.nu, a station in Amsterdam that has roots going back to the late 60s, decided to air every performance from all three days of NorCal NoiseFest this year, which was yet another way that people may have heard the stuff that we do. It was really cool to know that there were multiple ways, across several platforms, that you could see and hear what we do, with live interactive chat on top of it all. We had people from all over the world involved with, performing in, and listening to / watching, our performances. It was really cool.

Anyway, I was performing from my studio on the web stream roughly around the time that UB Radio Salon usually airs, so for their show (and on the re-broadcast, and finally, on the podcast), the Mini-Mutations set is included… along with some excellent and amazing other performers, too. This is at normal speed, but seems to be the audio from the stream… so you can hear what it was like for people live. (I made a remastered version will audio captured off of my mixer live, that sounds a little better.)

Enjoy this excellent slice of radio, with more Mini-Mutations!