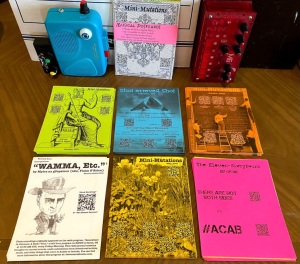 The Lava Lamp Lounge Print-Shop has been working overtime lately, sorting out everything in time for the Rich Treasures DIY Pop-Up at The Art Department here in Salem, OR. If you haven’t heard, you should mark your calendar: June 26th, 2 – 5 PM. (Only three hours! Don’t be late!)

I will be selling an array of items that I’ve made over the years, and it will probably be one of the primary ways to see me in person, in a sort of “public” manner, this summer. I would love to see you there, even if you just want to stop in and say hello.

For sale to the public for the first time: Musical Postcards! Probably the highest profile art project I’ve done, these postcards have not been for sale before, and were instead only available to Lemonade Stand Supporters (and a select group of folks who are on the old-school mailing list). In fact, if you sign up for the Lemonade Stand right now, you will get a June Postcard popped into the mail for you, today, as a thank you for signing up.

However, if you would like to purchase these cards (for use at home, or to send to a friend), they will be available at The Art Department during this event, individually, or as a set, where you can get all of them at a discount. The music on the cards is only accessible through the QR Code; these aren’t available to download elsewhere, and you can’t get this music on other releases. These cards contain music by four different musical projects, totaling almost three hours of new music. Included in this are two singles by actual rock-and-roll combos, a long spoken word piece, and four different studio sessions by Mini-Mutations, unavailable in any other form. These postcards have all been designed by Austin Rich, and come on colorful cardstock, so you can see them coming as your postal carrier walks down the street.

These postcards have been mailed all over the country, all over the world, and has been referred to as a new musical format, something that is very exciting for people who want to make music that can be distributed easily, and cheaply, in a way that could be affordable to anyone with a stamp.

There aren’t that many of these, so make sure to show up promptly if you are interested in these rare items. These are expected to sell out, to make sure to stop by early! 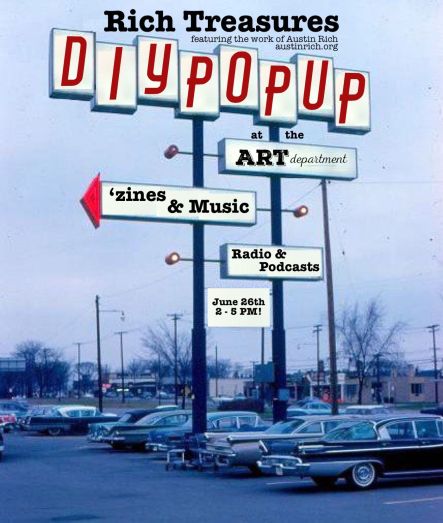