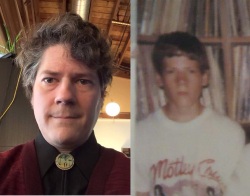 Do we ever really know ourselves?  Is it possible that we will surprise ourselves, up to the very end, only to have our expiring notion be something along the lines of, “I never imagined.”

Because you can’t.  You won’t.  You shouldn’t.  To really consider the variable I’s that you inhabit throughout your years is just too much to handle at any one moment.  We coalesce around a version of who we are saying we are, and project backwards and forwards in an effort to create continuity, and we are lucky to have this tool – language – that comes built in with narrativity, all used as a means of describing ourselves.  So much is stacked against us that we have to consider the self with a three-act narrative arc.

But the thing that is not discussed – this notion of identity, or being and self – are not described by a narrative arc.  More appropriately, there is a stuttering, stammering quality to the way identity is truly expressed.  Every moment we are reforming who I is, and who I will be in the next iteration, each time drawing on the versioned elements of our personas that stretch forward and backward in time.  There are so many things about ourselves that are difficult and complex to keep in our own consciousnesses, that in many ways it is easier to grab onto cliches and uniforms to help create visual and mental shortcuts.

I look at the me of today, and I wonder if I would be recognizable to any other me that I’ve identified with.  I don’t know what I thought my future would be like, and it is not something that I necessarily spent a lot of time concerning myself about when I was younger.  The work I wanted to do was more clearly defined, but the “me” that I thought about when the future occurred to me was once so ill-defined that in many ways I didn’t exist.  There was always a name attached to a novel, but who that name was supposed to represent was never clear to me.  I can only imagine what this ghostlike perception of self has led to as time has marched on.

I haven’t turned into a horrible person, or at least, I don’t think I have.  I can be difficult and neurotic and hard on myself, but I don’t think I’m particularly awful.  But I can see the compromises that this me doesn’t feel bad about, but I may have once taken issue with.  At 19, there are certainly things I never imagined I would ever do, in spite of not having a vivid impression of this future life I might live.  The problem with tomorrow is that it comes so quickly that you often don’t realize that you are there, and have even moved on to the thing after that, and that, and that, and that.

Firmly in middle age, it isn’t that hard to find where things went wrong.  It is the natural state of the middle aged man to find fault with everything – himself especially – and I can very easily look at the man I have been and lay out a dissertation on the missteps and failed calculations.  But this blurring of identity – this realization that we have dynamic mes that shift and chance from day to day – suggests that this person I remember is someone else completely.

A past me.  A me that cared deeply about keeping everything, a me that smoked cigarettes with a passion.  A me that worked for six years in a bookstore, who considered the hobby of “musician” to be an occupation at one point, in spite of the fact that it was anything but.  This person loved punk rock and chasing women and thinking deep thoughts and being self-righteous about half-formed bullshit.

An uneducated me.  An awkward me.  A scared and lonely me.

It isn’t that I have become someone I would hate.  Rather, it is that I wish I could be friends with who I once was, because he seems like someone I could relate to.

The path I’ve chosen is fine.  There are no great opportunities that I was offered that I virulently turned down.  If anything there were things I pursued that I soon realized I was never suited for, and I was better off, in the end, never becoming the person I briefly imagined I might have been.

The problem I have now is that I want so badly to find out who the person I am, now, actually is.  I can only look in the mirror so many times before the image looks foreign again.  We are, if anything, defined by what we do, and waiting for inspiration and pacing back and forth is not exactly something I want to be known for.

Nostalgia is powerful, and the me I once was has an allure and a charm that I am often very attracted to.  Who doesn’t want to believe that something you can’t have again was secretly better than anything you can have now?  At least that way, you never have to worry about happiness again.

But, just suppose, we had to be happy now.  Is is possible?  Could we find something in the present that isn’t backward or forward looking, but is content with the me of the present?  And, does my own future now look so ill-defined, so amorphous and dim?

More importantly, how will I reflect on this, years from now, when the person I’ve become looks back, and wonders, “What the fuck is this guys thinking?”

Or, perhaps, all of this is another mental exercise, a way of framing identity in an altogether different way, so I can continue to avoid addressing the underlying issue that is at the heart of all of this, the question that really wakes me up in the middle of the night, that sends me to the keyboard so I can hammer out something else, this urge that makes me anxious and confused most of the time:

Why is it so hard to be happy?