Happy Holidays From The Capital Couple!

It’s that time of year again around the

Capital Couple Hideout, and we’ve had an incredibly strange and wonderful year that we’d like to tell you all about. We began 2015 in the city of Salem, OR, where we had lived for much of 2014, and has become our new home. Not only does Marla’s family live here, but we both found new jobs that not only fit our new lives, but were working out quite well for us. Feyd, of course, has yet to find a job, and continues to take advantage of us, in spite of our best efforts.

We had some very big changes around the homestead, the first of which is that Marla & I now have a podcast. The Capital Couple (thecapitalcouple.wordpress.com). We’ve done seven episodes so far, and we talk about the things we do for fun, what it’s like here in Salem, and anything else that comes to mind. We have quite a bit of fun doing it, and we would love to urge all of you to check it out. On top of that, I celebrated my 40th Birthday in a fairly dramatic way, with a two-day show in Portland at Plew’s Brews and The Kenton Club, with music and friends. It was one of the most fun things I’ve had the pleasure of arranging, and you can see some highlights using this link: bit.ly/40thPlewsKenton. It was awesome.

As if turning 40 wasn’t enough, Marla and 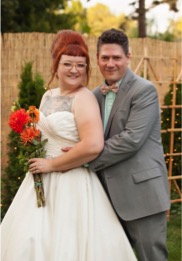 I also got married! Yeah, that was sort of a big deal, as we had been waiting for over a year to officially tie the knot. But the wait was worth it, as we had friends and family there to help us celebrate, and it was, without a doubt, the best day of my life. I want to thank everyone who was there and helped, as both of us had an incredible time, and I can honestly say I have never looked better, ever. You can find lots of unsorted photos at bit.ly/MarlaCodyWedding. (And, if you took photos that we don’t have yet, please send them along. We would love to see them!) I never imagined that I would ever be married, and I am finding that this life is not only worth the wait, but is something I didn’t know I would enjoy this much. All thanks to my amazing and beautiful wife, who said yes. 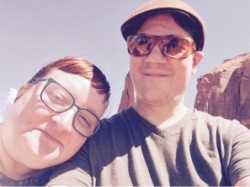 As if that were not enough (and, in a way, it wasn’t), our Honeymoon involved a two-week trip around the American Southwest, something Marla named, “The Great American Road Trip Colon Southwest Edition.” We drove over 3500 miles, saw The Grand Canyon, Disneyland, Monument Valley and the Zion National State Park, and it was as good as advertised. We had an incredible time, and realized that it was the longest trip we’d ever taken together, and the most time we’d ever spent together, continuously. It was amazing, and I am STILL going through all the photos and video I shot. You can see some of the highlights using this link: bit.ly/MarlaCodyHoneymoon. It was one of those trips that proved that I made the right decision with Marla.

2015 had some other ups and downs, but strangely enough, things seem to have worked out pretty well. I made a decision to stop working in jobs that I don’t like, and have been pursuing writing and podcasting full time recently. (acronyminc.org; anywhereanywhen.com). I can’t say that I know exactly in what direction this will all go, but I can’t wait to find out. I enjoy writing and radio almost as much as my wife, and I’m looking forward to seeing where they take me, too.

That’s it from our house this year. We are looking forward to seeing what 2016 had to offer, as this year worked out quite nicely for us. Until then,

Y’a know… making music.
I have returned from the forest. The trees are wonderful, and the rivers are amazing.
I’ve been curious.
I THINK all the folding and stapling is done? Maybe?
It’s an old-fashioned stapling party! Woo-hoo!
Available at the Rich Treasures Pop-Up: Musical Postcards! Individually, or as a set at a discount! These colorful cards contain 3 hours of music by four different projects, including two singles by actually rock-and-roll type bands. Limited quantities, and otherwise only available to Lemonade Stand Supporters. Find out all about them, and why you shouldn’t miss this event, here.
#Birdwatching #Squirrelwatching #DadCanWeGoOutside?
Oregon.
Makin’ Merch for my DIY Pop-Up event at the @artdepartmentsupply. It’s been an ink-and-paper weekend.