Two major forces were also at work in this early era of American history.  Film and, later, radio, were on the rise in the US, and as this fledgling music industry worked to develop it’s structure and form, the relationship film and radio had with one another was immediately parasitic.  As sound pictures began to develop, they were immediately married with songs, and radio could not only play records on the air, but promote film stars as well with drama and comedy.  These three media forms grew to become dependent on each other, and while film will undoubtedly get left out of this story (to be saved for some future series), the story of music and art in the 20th Century cannot be told without covering the subject of wireless telegraphy. 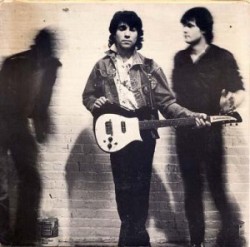 As the program moves into it’s back end, I decided to pull out a handful of songs that were not only about radio, but embrace the real center of this argument: the story of music is also the story of radio.  The Spirit of Radio could, in fact, be music.  There is something spellbinding about good radio, something I’ve been obsessed with for my entire adult life.  As soon as radio was self aware enough to do so, it started playing music for audiences, and I love exploring the subject of radio in a radio format.  It just seems fitting.

I’m not really that familiar with Jimmy Vigtone, and it’s possible that there was only the one 45 ever released.  However, I do know the Hyped To Death Compilations, which are all full of incredible gems of punk, post-punk, power pop, and other oddball records released all over the place.  I went through a phase around 2005 where I became obsessed with these collections, and every now and then I can find a song that is just perfect.  This one in particular gets stuck in my head all the time, and it really feel on the nose to me.

This track also works very well as something that runs behind vocal samples, obviously, but comes from a CD I found in a Goodwill here in Salem, and was singular in the kind of band it was, and for the kind of women that worked in the place.  I was very happy to pick it up for 50 cents, and it has entertained me well ever since.  At times listening to CAN feels like radio waves, rolling in.

To be fair, I am not the Rush fan I probably should have been.  I am the right age, and they were absolutely popular (and even played in my home by my parents).  You couldn’t avoid them.  But I never really was interested in them the way I liked Pink Floyd and The Doors.  But in time I would feel the power of what they were getting at, and while I can appreciate certain aspects of them, I’m not bound by any nostalgia or early childhood memory to enjoy them in spite of their other musical crimes.

However, this song (and a handful of others) are just incredible, and The Spirit of The Radio is really where all of this was leading.  Perhaps in an exploration of the form I will find new meaning in it all?  It is possible.  There are plenty of subjects I have not been able to cover in a radio form, and I feel as if Audio Essays are only beginning to be understood as a way of telling a story, but at a slower pace.  Like Rush, maybe I’m entering territory that no one else has.  But to me, making radio like this makes me happier than I ever have been happy before, and as I work on this series, I hope that some of that excitement can rub off on the show, on the listener, and the world around us.

After all, its a Sound Salvation.

March’s Postcard comes with a new EP by Mini-Mutations, and a sample of the new podcast, 20 Minutes Into The Future, that you can hear before the show officially launches! Follow the link for more information:
March Postcards Are Ready! If you want to join the mailing list, let me know.
This image alone is ALMOST worth returning to social media for.
Our “Max Headroom” podcast launches 21 March. Our second episode, where we talk about the BBC 4 telefilm, will air exactly 36 years after the original broadcast, at 23:00 GMT. (6 PM EST, or 3 PM PST.)
I’m launching a new podcast with my friend @ms.hattie.crane, and we are looking for a little feedback.
My submission for the #SalemSnailMailArtSwap happening @artdepartmentsupply, which will get dropped in the mail this morning. This includes a collage on the envelope, a mail-art collage piece inside, three mini-‘zines (limited quantities, hand cut/folded/numbered, available via the mail), and three pieces of Mutated Money, each one with unique serial numbers. I’m really looking forward to this art show, and I can’t wait for more stuff like this to happen in the area. Well done, @artdepartmentsupply!
New exclusive Mini-Mutations track on this free digital compilation.
February Postcards are HERE!