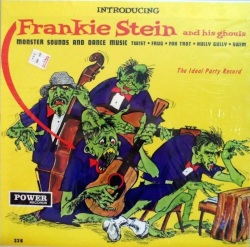 Frankie Stein And His Ghouls!
(Originally podcast on 14 October 2014.  Expanded as a blog post for this presentation.)

Before The Cramps & The Misfits there was another Monster Themed rock band, made up of real monsters, that was blowing the socks off all the cool kids in mid-’60’s: Frankie Stein & His Ghouls!  But the story of how these monsters came to be was so secretive that, for many years, it was completely unknown to most.  The mystery behind Frankie Stein & His Ghouls is, for some, most of the charm, and in the summer of 1964 when their first record slipped out into stores, unannounced, it was pretty clear that the Synthetic Plastics Company (under the Power Records imprint) had a hit on their hands.

For those of you who don’t want the mystery of these recordings ruined for you, I completely understand.  You might want to skip most of the rest of this essay.  There is something amazing about the complete package you see in the album above.  This was absolutely marketed to kids in every way, but also: to HIP kids.  Kids who liked to dance, who understood how cool ghouls really were, and knew that having monsters at your party was the only way to be “cool.”  If you grew up like this, you probably don’t want to know the truth about Frankie Stein.  Who would?  The band is better off as a group of unknowns.  In a way, I like to think that these records really were made by the monsters you see on the covers.

It’s sort of lame, in this modern age of instant-information, to think that you have to know everything about everything.  It’s the same problem when Jandek went from a genuine mystery to this guy who releases eccentric records that a fair number of people have now met.  This group of monsters cutting rock and roll LPs is just as reasonable to any boring truth that would probably ruin the charm of these amazing recordings.  So, please, feel free to skip the story below.  I won’t be offended.

But, if you want to learn a little more, follow me…

In 1950 the Synthetic Plastics company went from the premiere manufacturer of plastics that were used by the garment industry to the premiere manufacturer of children’s music entertainment, basically overnight.  It was not a glamorous or financially solvent field to enter into, but from the perspective of the company, Children’s Entertainment could be produced in the same way that their assembly lines had produced plastic products for clothing.  Turn your limitations into strengths, and hire good workers to produce quality materials.  Then, find the right store to stock your product, and roll out the advertising.  The ideas were basic business practices for decades now, and Synthetic Plastics went about creating a number of subsidiary companies throughout the ’50’s and ’60’s to release one kind or another of children’s LPs as a way to stay competitive.

While the idea that each of these different “labels” all had a traditional staff of record industry analogs is to even give the practice a Synthetic Plastics that much credit or planning.  Each staff member at Synthetic Plastics headed “a label,” and they were each in charge of the releases that label put out.  The company had a studio, and everyone learned how to run the gear on their own.  Once a recording was finished and the covers were designed (again, by the one in-house self-taught design team), the company would ship these off to be pressed, after which the records were sent to their warehouse, where they shipped out their product to every store that carried their stock.  Everyone was urged to get as many releases out as possible.  Quantity was going to win this battle.

Story albums and collections of children’s rhymes and songs were instant hot sellers, but as the ’60’s began to start rocking, it was clear that the kiddie dance crazes were another market that Synthetic Plastics to fill.  Kids were really enjoying these LPs of dance songs, each song catering to a dance that was popular.  This wasn’t Rock and Roll per se, just a very watered down and “whitened” form that was popular everywhere now that groups like The Beatles and The Stones were starting to get going.  These dance LPs (instrumental, of course) were safe ways that parents could let their children enjoy Rock music, and built in a guaranteed fan base for rock music as the kids got older.  Synthetic Plastics began searching for some musicians that “got” this new sound, to produce records for them to release.

The found the perfect Duo in the pair Joel Herron & Fred Hertz.  Joel had came out of radio, conducted his own band in the ’50’s, and had made a name for himself as a bit of a songwriter.  Joel met Fred working on The Jimmy Dean Show, and they bonded over having grown up on jazz and swing, but having a love of the new R&B and Rock music that came with girls, dancing and drugs.  Joel was approached by Synthetic Plastics to assemble an in-house band to record for some of these dance records they were planning, and the money was just good enough that he brought Fred Hertz (and some of his regular players) along with him.  Joel and Fred bonded over pop culture, and loved talking about different creature features they had recently taken in, always making obtuse and crude references to bad horror tropes when the got together.  Very quickly they developed a sense of humor that made them a perfect working partnership.

The idea was to lay down some tracks that Synthetic Plastic could use as “bed music.”  With a set rhythm section recorded, the label could go back and have different “lead” musicians do different solos and bespoke licks over the same bed music.  This gave Synthetic Plastics the opportunity to creating a number of “songs” without having to record the whole band every time.  The more unique lead parts they could lay over the tracks, the better, and soon one session with a full band was paying off rather fruitfully for the label.  Using different themes and cover designs, Synthetic Plastics managed to do very well for themselves with this idea, and by 1963 a number of these Dance Records has been making the rounds in stores, and sold fairly well.

It is hard to say who had the idea first, but after a night of getting loaded and goofing around in the studio, Joel & Fred took the sound effects from the studio archives and laid them over the dance tunes they had recorded, and made a tape for themselves that they would play around for friends.  They knew they could outdo “The Monster Mash” in terms of performing, and the way they mixed the tracks, it sounded like real monsters were playing the tunes.  Both Joel & Fred were well aware of the Shock Theater! monster book happening around them, and while the tape was started as a joke, once they got a cover mocked up and had made a few copies for friends in the radio industry (pressed under the amusing moniker “Power Records,”) it seemed as if the idea was crazy enough to actually work.  In 1964, Synthetic Plastic tested “Introducing Frankie Stein and His Ghouls: Monster Sounds And Dance Music” (The Ideal Party Record!) to an unsuspecting America.  It sold out in every store, and thus the “Power Records” label – which had not existed before – was handed over to Joel & Fred.

The next year was busy for Joel & Fred, and in the summer of 1965 they released four new Frankie Stein LPs, and re-issued the one from the previous year, all of which sold very well everywhere they were available.  These were easily produced in the studio, again recycling other tracks they had cut for other dance records, then remixing them with the “Frankie Stein Sound,” and it seemed as if Joel & Fred had set up a cottage industry.  But they also had other interests in Hollywood, and making kids fare all day, every day didn’t really appeal to them, especially given how cheaply Synthetic Plastics was producing them (skimping on things like studio time, and pay).  Fred went on to be relatively unknown afterward, and Joel went back to radio and television, popping up here and there for the remainder of his life.  Frankie Stein & His Ghouls would be a nice footnote to a small paycheck they had received from Synthetic Plastics, and wasn’t really thought about by either of them again.

As time went on, these records began to become quite collectable.  The original print runs were the only time Synthetic Plastics put any money into the project, and when Fred & Joel left, both Frankie Stein (and Power Records) essentially stopped production, and the company moved on.  Until some of these songs were reissued (incompletely) on a two-CD set in 2005, the primary way anyone heard this music was from a friend who had made a cassette transfer, and to this day LP rips float around online.  Fans had no way of finding (or confirming) information about these records for decades, and while the value of the original LPs (like much of the Synthetic Plastics releases from their early days) skyrocketed in value on the resale market among people in the know, they were completely unheard of by most everyone else.  For a long time, these albums seemed mythical.

This, in many ways, ushered in the modern era of Halloween Novelty records.  Frankie Stein took the ideas of scary sounds LPs and “The Monster Mash,” and combined them in a way that punk bands have been doing every year since.  And there is immense charm and genuine strangeness to these albums that qualifies as experimental at times, too.  And, let’s not forget, they rock and roll was pretty good for 1964, when you get down to the playing.  Frankie Stein did not invent the Monster Rock And Roll song, but in five albums over less than two years, he certainly perfected it, codified the sense of humor, and insisted on a good backbeat.

These days, these albums are virtually forgotten by the mainstream, and are rarely dusted off outside of record nerds like me.  But the idea of music by monsters is so compelling that these albums deserve a second listen.  These are albums made during the golden age of children’s albums, and in many ways, the perfect synthesis of a studio system creating the Casablanca of monster records, almost completely by accident, like some creature born in a lab.

It isn’t required that you know how these kinds of records get made.  But it is important that you get to know them, anyway.

Their page on discogs.com

Roger’sBasement.com.  (A fan site from the ’90’s / early ’00’s that details every scrap of information anyone can find / has / knows about Frankie Stein.  This site is now defunct in the last year, but there are archived versions of the site at archive.org.

Amazon.com sometimes has a remastered CD containing most (but not all) of the Frankie Stein songs.

I'm the local support for Negativland (with live visuals from SUE-C), which is Tuesday in Eugene, OR at @oldnickspub. I guess spending this weekend getting ready was a good thing?
Are you a fan of Max Headroom? Wish there were more? Now you can help us make a new episode, as we work with one of the writers using an unproduced vintage script to create an audio drama featuring our favorite computer generated talking head.
I’m desperately waiting for this storm to really get going. We need several days of rain.
If true, I may stay up for this. We need rain badly!
The Boys love their window-beds.
Three is a magic number.
I really hope we get rain this weekend.
I don’t remember Yummy Mummy.
I guess I got a Half Man, Half Biscuit album, too. Thanks Sierra!