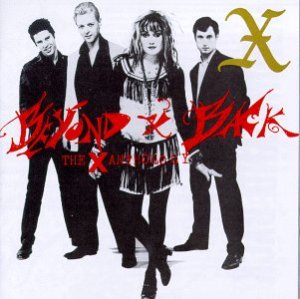 Aside from the loosest connection to Spark-gap broadcasting, I take every opportunity I can to include an X tune in a show, so I can again remind people that I got to meet Exene Cervenka, and interview her form my 12th Anniversary broadcast. It was one of the coolest moments in my career, and she was game to hang out and chat and make my night.

As a huge fan of X ever since I was introduced to them via The Decline of Western Civilization, I’ve seen them several times now, and I find their songs an endless well of inspiration and perfect rock music structure. In many ways X distilled the entire history of rock and roll into a hopped up unit of cool, painting these perfect and harrowing images in song form. There’s a reason I ended the program with “I Must Not Think Bad Thoughts” for so long, and I will find any reason to play X. They’re just one of those bands.

But like I was at 20 when my friend Lyra Cyst forced me to watch Decline, there was a point when I didn’t have most of their albums, and when I was completely new to their stuff. For someone in that theoretical position, who wasn’t sure about a new band as they were generally skeptical about all things new, the Beyond & Back two-disc set would have been a great entry point.  It not only gives you a very good overview of the band and their history, but offers treasures, unreleased tracks, all the hits, live bits, and other mixes of well known tunes.

What is genius about this collection is that it rocks all the way through – essential for hooking new accolades – and rewards long-term fans with treats you didn’t know you needed to own. A lot of collections like this tend to fall short of being anything other than a greatest hits shtick, or a contractual obligation release. To make it a two disc set that complements and introduces all at once is pretty fantastic, and a rarity for most artists.

“Blue Spark” has a sort of stop-start structure to it that you can imagine acting as an SOS Signal, sending out bum-bump message to someone across the bar. There is always an undercurrent of smoldering sexuality running beneath most X songs, a sort of pulse that vibrates in time with the rest of the tune. When X is firing on all cylinders they are sex, strutting around the stage with beers in hand and cocaine eyes that want to have their way in spite of the terrifying world that exists outside the club door. They’re looking to create a spark in the listener’s mind, to turn them on and make them dance and celebrate in this secret corner of the city, away from the pain and misery and violence and horror that the rest of city pummels them with each day. They just want to look you in the eye as they sway in ecstasy and know that you are feeling it too, in that moment. They paint a picture of a horny dude waiting for his famous wife to finally fuck him after a long day, but they do it in the most sexually propulsive way imaginable, ignoring the subtext of the loneliness and isolation both characters feel in their lives, separate and together in spite of their orgasms.

The build-up and release form does, when you squint at it, mirror the morse code that radio took before voices were seamlessly integrated into wireless broadcasts, and the penetrative power of radio itself could take the sex metaphor to other places, if I wanted to make that case. But I think X handles those with a little more deft that is not only the perfect rock song, but is more suggestive upon repeated listenings.