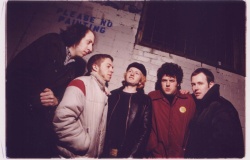 If you lived in the pacific northwest in the late ’90’s, it seemed as if the music scene was going to be ruled by KARP with an iron fist.  So, when they broke up suddenly in 1998, we were all a little heartbroken.  Their final record destroyed , and they were a unique band making records that reflected their own sensibility that was unlike a lot of music you heard among the too-cool-for-school indie rock stuff that Washington was popular for in the post-grunge days.

So the sudden announcement of an Olympia super-group – adding Jared and members of Behead The Prophet No Lord Shall Live to form The Tight Bros., seemed incredible.  Even more-so was the release of their first 7″, Take You Higher!, with four songs that were not only a mission statement, but a perfect synthesis of the 70’s party metal ideas into a faster, high-energy form, brilliantly cribbing their name from a classic line from The Derek Tape.  The genius was in having Jared sing, and Quitty‘s natural inclination to play like a triple-timed AC/DC only cemented their sound.  In Eugene, THE record of summer ’98 was this piece of Tight Bros. juvenilia, undoubtedly. 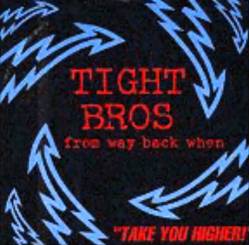 Lied” seems like a typical answer song, a sort of hopped-up version of a “girl done me wrong” quip.  But what “she” lied about is unclear, and his babe is saying it all over town.  In the social media drama reality of the modern era, Chicken Little could be our childish friend who likes to stir the pot online.  Still, I like to see a sort of “take a chill pill” angle to the way we respond to the world at large.  Look, babe, the sky ain’t falling, and don’t freak out over something that isn’t true when there’s plenty of other ways to spend your time.  I think that advice scales up in a lot of ways.  Don’t tell me the world is going to end unless I repent.  I am autonomous, and the sky will not fall, no matter how loud you get.

A song like this so completely relates to Chickenman it is almost too on the nose.  Like Hawkeye from M*A*S*H, we’re all tilting at windmills most of the time, watching the world around us go about their day as they scream incoherently about how things aught to be in some sort of parody of a Marx Brothers routine.  There are a few of us who are willing to square off in whatever deluded manor we choose to say that the sky, really, truly, is not falling.

For now, anyway.  Just shut the fuck up and rock out, okay?